As of 4/18/17 this comm has been imported to a mirror community, Wolf Tickets on DW. I do not have any plans to delete the LJ comm at this point; this move was precautionary only.

You may post to either community, but please do not post to both. I will import this community on a regular (though possibly infrequent since it’s been so quiet) basis and I would rather not have duplicate posts at the DW comm.

If you have any questions you may ask them here or contact me at spikedluv @ livejournal.com.

Hi All,
So I've been rewatching the entire series and got a few screen-caps I thought I'd share. Hopefully they can get everyone's creative juices flowing! (Sorry for the random order...I'm lazy!) *Spoilers for finale* 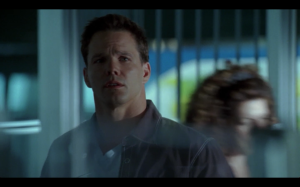 ( Collapse )
Hi! Is this thing still on?

rubynye
Pairing: Colby Granger/David Sinclair
Rating: R
Summary: David's been looking for Colby.
Content Advisory: Set after the series ends.
Disclaimer: This fanwork has been created for pleasure only and not for profit.

( David's in the middle of deciding who to call next when someone knocks on his apartment door.)

Summary: When the offer to transfer to Washington after the spy thing comes through, Colby decides, not completely un-influenced by a certain other person, to take it, hoping it will be a good way to put everything that happened in LA behind him.

Washington, though, doesn't prove to be all that easy, even without the shadow of his time as a spy hanging over him, and the freedom he's finally got to be himself isn't turning out quite like he always imagined it would. Plus, he's mostly failing to leave LA behind, between Megan's friendship and Amita's and Charlie's math smarts.

It's only a matter of time before something gives

Title: All We Have Are Memories
Pairing/Characters: David/Colby
Rating: PG-13
Summary: “One word, and suddenly I‘m drowning in crushing nostalgia.”
Word Count: 300
Spoilers: N/A
Notes: None, other than the fact that this started off with over 450 words, o.0 This was originally written for the

numb3rs100  May monthly
theme language and posted there first.
Disclaimer: All characters, episode references and quotes/Numb3rs in general aren’t mine.

All We Have Are Memories

mustangcandi  . <3 Story title comes from the song by the Backstreet Boys that gave me this idea.
Disclaimer: All characters and episode references/Numb3rs in general aren’t mine.

Title: Not Alone in the Aftermath
Pairing/Characters: David/Colby, Don
Rating: PG
Word Count: 1040
Summary: In the aftermath of a natural disaster, all they see is each other.
Notes/Warnings: Thanks go to

sororcula for giving this a look over and making it much better than what I started with. Title taken from Adam Lambert's "Aftermath". *cough* Written for

This fic is a huge first for me: first smut!fic, first slashfic, first David/Colby fic, hell it's only my second Numb3rs fic. Also, written during the hours of 3am and 5am; I was literally running off of fumes. So I'm sure there're typos, tense inconsistencies, OOCness and such. Sooooo...constructive criticism plz?